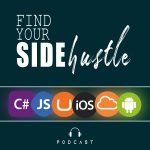 Find Your Side Hustle
#2 - Background

In this episode, I briefly talk about my background. How I got interested in computers and software, and how it led me to really want to start my own side hustle.

Hello, ladies and gentlemen, my name is Phil Hughes, and this is the find your side hustle podcast. So I spent well over a decade working on side hustles as projects. Hoping to find that one thing that takes off so I can leave the constraints of the rat race, the nine to five, this podcast gives you a behind-the-scenes look and the sort of things I’ve built over the years. Hopefully, showing you some of the pitfalls I’ve come across on starting and working on side hustles.

So I’m not saying I’ve been successful yet. I’m still trying to find my one thing. I’m hoping that the mistakes I’ve come across helps you to launch your own successful side hustle. Good morning, everyone.

Welcome to the second episode of find your side hustle. I’m Phil Hughes. Um, and today I’m just going to talk about, uh, my background basically, and what led me to, to where I am and trying to start my own side project. In episode one, I discuss a little bit about myself, uh, that I’m a software developer by trade, but I’ve got goals to be my own boss, basically, and run a little side hustle that brings enough money in to cover our bills and gives us a comfortable lifestyle.

So I got to this journey, I’ll just go into a bit of my background. So I’m a software developer. I always loved computers. Um, from the age of eight, my parents bought me an old ZX spectrum where it used to make the noise when he was loading games on it and loved it and that that was the start of the journey that led me to where I’m now, really interested in computers.

I always had a games console. Um, I was extremely lucky at the age of 13 back in sort of 93, 94, my parents, um, had enough money to, to buy me my first ever PC. Then that was it. I was hooked, always toying with stuff online, um, messing about with applications, testing it, new software, reading up on what different parts of the computer did.

Um, and with the invention of the internet in 97, just really, really took hold of my interest in software, computers and online really. Back in them days when you wanted to do sort of a course or anything like that, I remember going to college in 97 and looking at starting and doing a computing course. And at the time the college shared a computer between two students and quite a lot of the computers had actually broke. So there was actually three people to a computer and I’ve just thought, well, this is pointless.

What can I learn? I’ve got a PC of my own that I built, I think it was on my second PC. I thought it’s pointless. I’ll learn more at home.

Fast forward a few years till the year, 2000 at the age of 20, uh, I was really unhappy at my job. I didn’t know what I wanted to do. Uh, just went to the local night school and they did a course in computing. Originally, I was going to do some sort of design. I’d always done art and design at school and thought that would be a way forward for me, but I saw this computing course and it was a HNC in computer science and I signed up and it took two years, and at the end I graduated with a HNC in computing and loved it, got into programming, and then started considering what my next move was .

I said, I was, I was really miserable at my job, hated what I was doing. It was not challenging at all, really wanting to find something else. Um, and just after, a bit of a discussion with my parents, having a look at a few things. The next 12 months, I started looking actually, quit my job and moving out and going to university as a mature student.

I managed to do that. So at the age of 23, September 2003, I began a computer science degree at the University of Manchester Institute of science and technology, which is no longer, um, a university. So UMIST merged with the Victoria university Manchester and became the University of Manchester, but my degree started at UMIST. So if anyone from UMIST is, listening, um, you’ll probably have the same sort of affection to that, to that college that I had.

So I did that for four years. Absolutely loved every minute of it. Um, it was a three-year course with a year in industry and I was fortunate enough to do my year in industry with Rolls Royce motorcars down in Chichester and loved that it was great. I got to drive a Rolls Royce as well, which was amazing as well as a couple of BMWs, like an M five.

Um, so I’d always had a little bit of a passion for cars. So that was brilliant. That’s scratching two itches programming, driving Rolls Royce, it wasn’t, um, bad 12 months, um, that really got my love of programming. University was great, it taught you a lot, but to actually do something in the real world and produce stuff for like the accounting team.

Um, a lot of the logistics side as well, really got, got me interested in programming. So that was the end of 2006 that I finished at Rolls Royce motor cars went back to uni final year, graduated with a first-class degree with honors, um, from the then University of Manchester after the merger, um, basically just went straight into a job straight away. So 2007 summer, 2007 at the age of 27, I started working as, a full-time as a programmer for a hosting company based in Manchester in England. Um, that was good, I started learning a lot, really interesting stuff to work on, and it was the start of when websites were becoming in, really, really popular and big.

I’d always after university, I’d always thought about starting a software product. Um, my final year project was about trying to help people with poor sight that we’re blind to help them type letters. They could always type really good, so the concept was great. It was just the layout was always a bit bad. Um, and I had had a relative who was blind from a young age. I remember she really struggled with things, so that was an interest of mine.

And I thought I could take that on and, and build a software product on top of what I learned at university, never really got round to doing that, but that really sparked my interest. So my job became more and more my hobby. So start building your own websites. Did my own little blog, my own little CMS, um, and then started building a portfolio, a website for my parents.

My Mum and dad had a little side business where they’d buy houses and do them up and try and sell them on for profit. So I used my skills to create little portfolio website for them. I had a friend who ran a couple of, um, nightclub nights. He did nightclub promotions and things like that, and he wanted me to do a little sort of gallery for one of the student nights he ran. So I got into that as well and it really, really sparked my interest and toying with moving into the freelance world. This was probably getting on for the end of 2009 start, 2010.

So I’ve been working for three years, did enjoy what I was doing, um, was learning a lot. Um, and I’ll come on to, to what really made me want to move to my own business, um, in the next episode. But that really got me going and really wanted me to do my own thing. As people normally do.

Um, you either pigeonhole yourself and say, Oh, I’m an ideas, man. I’m just not very good at executing. Oh yeah, I can always execute, but I just have zero ideas and I was in the latter camp basically. I didn’t think I was an ideas, man.

I thought I could execute. So it was always like, Oh, I really want to do something, but I have no idea what to do since then I think in another later podcast, I’ll go about how you find an idea and what you try and use that for to produce something. But at the time I was just sat there going, right, I really want to do something. Don’t know what I want to do, I have zero ideas, but then, chatting to a university friend, um sort of backend of 2010, um at the age of, you know I had just turned 30 that year, been working for three, four years. Um, and then really wanted to try and do something.

And he come up with an idea, um, and where I’ve just checked last night, actually, when we registered the domain. And when we’d kind of set up the server in January 2011. So I remember just before Christmas of 2010 and went round to his, we had a load of note pads, went through what his idea were. I think in episode four, in episode four or five.

I’m going to go into like the first-ever idea I started working on what, this is what my friend came up with. Spent a bit of time, working on that. Well, then that was it. That was the start of the journey, that was the real thing that started this like tenure process of really trying to find a side hustle, project I can work on, something that will bring me an income and that I can then focus on, working full time and supporting myself and then trying to scale it to a proper business. So that’s just a little bit of background about me.

Um, and the next episode, episode three, I’m going to go into my origin story. Everyone loves an origin story, you know, Marvel, even Star Wars. Now with the Solo story, everyone really loves sort of an origin story. So I’ll go into a thing that really, really motivated me and give me a lot of focus to actually go into it, really balls deep as it were to try and find something and really focus on it on a side hustle or project at night.

Um, so yeah, so that, that’s my background. Thanks for listening. And, uh, hopefully, I’ll catch up with you on the next episode. Have a good day.

Thanks for listening to the, find your side hustle podcast. If you’d like to find out a bit more about me and the projects I’m currently working on, visit my website at philh.co.uk, and I will speak to you soon.